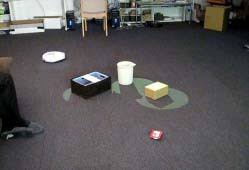 A laser pointer can be a powerful tool for robot control. However, in the past, their use in the field of robotics has been limited to simple target designation, without exploring their potential as versatile input devices. This paper proposes to create a laser pointer-based user interface for giving various instructions to a robot by applying stroke gesture recognition to the laser’s trajectory. Through this interface, the user can draw stroke gestures using a laser pointer to specify target objects and commands for the robot to execute accordingly. This system, which includes lasso and dwelling gestures for object selection, stroke gestures for robot operation, and push-button commands for movement cancellation, has been refined from its prototype form through several user-study evaluations. Our results suggest that laser pointers can be effective not only for target designation but also for specifying command and target location for a robot to perform.